How to be a Southerner: A “Barbecue” vs. A “Cookout”

Joseph and I have decided it’s time to educate folks on how to be a Southerner.  Here’s a helpful post on how to be just that.

Before you read the rest of this post, take this simple test:

If I invited you over to my house for a “barbecue,” you would expect to eat:

a. ribs, chicken, or pulled pork
b. hamburgers or hot dogs
c. I’m a vegan, so you probably don’t have anything for me

I’ve met a few people from the north and the west.  They were pretty different from me, but it wasn’t weird or anything.  We actually got along quite well, but I’m not surprised.  I have what some like to call “southern charm.”

Our biggest disagreement, though, came over the nature of the word “barbecue.”  One of the guys was talking about how many hamburgers and hot dogs he had eaten at a “barbecue.”  The conversation went like this:

Northern guy:  One time, at a barbecue, I ate so many hamburgers and hot dogs I got sick.
Me:  You mean at a cookout?
Northern guy:  Yeah, same thing.
Me:  …no

I then tried to explain to him the difference.  In this particular setting, several other northerners and west coasters came to his defense.  Even doing a quick google image search of “barbecue” shows how few people actually get it.

That conversation happened almost 7 years ago, and it still bothers me today.  So…I figured I’d explain the difference.

Wikipedia, which we know to be infallible, differentiates between the two.  “Barbecuing” is the act of slow cooking meats over indirect heat.  “Grilling” is fast cooking over a direct flame, also known as a “cookout”.  So, now, you understand the difference, at least on a technical level.

But it’s still more than that.

If I invited you to said cookout, I’d throw the stuff on the grill at 6 and we’d be eating by 6:15.  I’d fully expect you to show up with a pasta salad, or some chips, or maybe some baked beans.  Maybe I took 30 minutes of prep time for the burgers, or maybe I was lazy (probably because we aren’t that close) and just bought those pre-made patties, poured some Worchestershire (or however you spell it) on them, sprinkled some Tony C’s, and threw them on the grill.  Pretty simple.  We’d eat the burgers, maybe have a beer or two (or a Coke if more than one Baptist showed up), and everyone would be on their way.  We’d all walk away relatively clean, and we’d laugh about what a fun time we had.

A lovely sight, but not a barbecue

But, if I invited you to said barbecue, it’d be totally different.  I’d carefully select the ribs (because if I go to a barbecue that doesn’t have ribs, everything is sad), prepare them the day before, and put them on the smoker for 6-8 hours.  I would expect you to show up with a side dish of white bread.  Maybe barbecue sauce, but don’t let me see it, because my ribs are too good for barbecue sauce.  White bread is really good with barbecue sauce on it, though, so maybe that would be an acceptable side.  Whatever.  I would cut the ribs into half slabs, give you a paper plate and some paper towels, and hope that you didn’t ruin every article of clothing you had on.  Real barbecue is a messy affair, but nobody really cares because you’ve just eaten the best thing you’ve ever eaten in your life.* 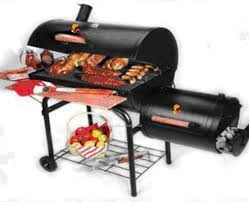 If you’re really lucky, I’d say “hello, <insert name here>, do you want to come over around noon when I throw the ribs on the smoker and hang out all day?”  And your answer, if you are a sane person, would be “Absolutely I do.”  Because that is the sign of true friendship.  Seriously – there’s nothing better than sitting outside on a nice day smelling ribs on a smoker.  It even makes something as terrible as baseball enjoyable.

Simply stated, if you answered “b” to the above test, you’re seriously missing out.  Barbecue takes many forms – it can be Texas** brisket, North Carolina pulled pork, or Memphis ribs.***  But whatever form it takes, the distinction between a “cookout” and a “barbecue” is very, very important for eating in the south.

*It is very important that you not make the mistake of wearing nice clothes to a barbecue.  It’s probably also a good idea that you not go to a barbecue with someone you are either interested in or in the beginning stages of a relationship with.  You may see things that will haunt the rest of your relationship.

**Not the south, but Texas brisket is amazing.  I was late to this revelation, so I missed several good years of life.  But sliced brisket with a touch of hot sauce…be still my soul.

sometimes funny. occasionally serious. just kind of along for the ride.
View all posts by Chandler »
« Previous post
Next post »