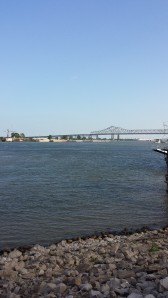 Every time I visit New Orleans, I take a moment to stare out over the Mississippi River.

I’ve never been sure why I do it. Perhaps it’s an act of sentimentality. Maybe there’s something soothing about it to me. Maybe I am jealous of Huck Finn and his ability to just follow the flow of the river and see where it takes him. I don’t know exactly what it is, but I know that I have to stare out over that muddy river.

Since my life has taken every sort of strange turn that it possibly could, I found myself in New Orleans twice already this week. Monday, I had been asked to tag along to a Mumford and Sons concert at the last minute. When I say last minute, I mean it. We basically drove three hours in order to miss most of it and only catch some 50 minutes of the show.

And it was totally worth it.

The drive down with my friend Baskin was as interesting as we expected. We stopped at an awful gas station with a catfish restaurant named “Mr. Whiskers” which we thankfully avoided the urge to eat at. We sat in an Arby’s that played as many karaoke standards as it possibly could. We drove far too fast across Lake Ponchartrain because we were still 30 minutes out and they were already getting on stage.

It was a comedy of errors. At one point Baskin said, “So, do you think we’re out of ‘Embarrassingly Bad’ territory and more into ‘Still Worth It’ territory? I had to reply with, “I think we’ve firmly been in ‘This Will Be A Funny Story Later’ territory.” He agreed.

This isn’t really the tale of how we drove three hours for not even an hour of a concert, though. This is a story about how this time, I stared out at the Mississippi and fully understood why I had to do it every time I was there.

God always ministers to me through music. Whether it’s singing a classic favorite in church one day or hearing just the right song at just the right point in my life. Either way, music plays a huge role in my life. You can say what you want about Mumford and Sons and their theology, but their songs speak. They speak to our hearts, and that’s important for music to do. Otherwise it’s just meaningless noise.

As we sped over Lake Ponch, I kept thinking to myself, “Well maybe we won’t miss any of my favorites. Maybe we’ll walk in right as they start up ‘Below My Feet’ and that will mean something. Maybe, just maybe it will serve as a reminder that all MUST be well.”

The venue was somewhere I had never heard of in a part of town I had never been and with an entrance I really couldn’t see. As if we weren’t late enough already, we had to spend extra time just finding out how to get in. Like I said, things were definitely not going as planned.

Yet we did end up finding the entrance. We ended up going through the gate and making our way into the crowd just in time to hear the opening notes of Below My Feet and to see the band set up directly in front of the Mississippi River. And all was well.

There is hope in dark times. There is always a chance for rebirth. I think the Mumford boys understand that, and it shows up a great deal in their music. In fact, they played four songs in a row that spoke directly into my soul, much like God himself was singing things to me and forcing me to accept His planning. Hope goes hand in hand with pain. It goes hand in hand with being taken places you don’t want to go. Because without desperation, without pain, how will we even know that we have anything to hope for? Without the pain, how will we ever grow and learn? How will we remember how to fight for what is worth fighting for, and to focus on what should actually provide our identity and satisfaction?

I find strength in pain because I see how my own weakness will only cause me to drag my feet. I will change my ways, not because I have the willpower to do so or because anybody demanded that I do, but because I have been shown the mercy to do so. I will know my name again, after living for so long as some other person.

As I looked out over the Mississippi, it all made sense to me. I loved to stare at that river because it spoke to my soul. Because it WAS my soul. It is a big, ugly, muddy mess that so often creates many more messes, and it flows through me. Yet it always moves, always continues, always flows. It grows and it shrinks and sometimes it swells so large it destroys what is around it. That old muddy river is nasty and problematic and essential. Like that old river, I sometimes just drift slowly along. I sometimes fly forward like a torrent. And continuing to move forward doesn’t mean you are giving up on the past. Not in the slightest.

I stare at the Mississippi because it forces me to focus on what is happening in my soul. Right now? I’ve been focusing on the mud. I put something good and wonderful on the throne of my life, and when it couldn’t satisfy me, I tried to give up. I turned to all kinds of mud, shaming the good and wonderful thing that I held onto. I grasped at everything I thought I held dear, such as my home and my family, in an immature attempt to remain secure. I never realized I was supposed to give that security up.

Putting that much focus on these things I held dear turned them from something wonderful to something crushing. They crushed me, crushed those involved, and eventually crushed itself. Could they someday be repaired? I pray so, because those people and relationships push me and grow me and mature me and they are things I want to have in my life. But whether or not they are repaired isn’t what matters. What matters is that the throne is occupied by the One who deserves it.

I once wrote about my home. It was a post that was fairly popular because much like that gross muddy river, it resonated with a few people. But I was very deliberate with the wording of the end of it. I wanted to write about my home, but I wanted to approach the future with the openness I knew I needed.

“You see, I am Mississippi. It is in my blood; my being. And wherever I go, I bring her with me.”

That old muddy river is a part of my being. It flows through soul, and I will flow along with it. At the time I wrote that piece, I knew I would be leaving this place. I thought it would be right then and there, but it wasn’t. Then I ran from that truth, like I ran from the One who should’ve been on the throne. But I’m being reminded of it again. Even as I type, I can feel myself being taken away from here, and I’m finally ready and looking forward to it. I will leave this place, which I’ve clung to for quite some time. I will follow the flow of the river, wherever it takes me, growing as I go.

4 responses to “My River Soul”