History, like any good fishing story, gets more and more misremembered over time.

The Trojan War was largely assumed to just be a myth for years, then somebody stumbled across the ruins of the city. Now because of that and Brad Pitt, people just assume the Trojan Horse was a real thing as well, despite any actual proof of this existing. This just goes to prove that history is most often determined by gorgeous men in skirts.

Because of this, it’s easy to understand that many people with major historical influence get overlooked due to being fat and unmarketable. One man with plenty of reason to be angry at history is William Dawes. 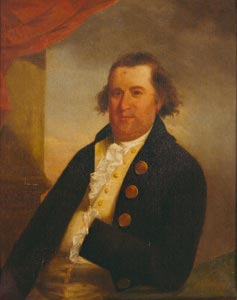 Dawes lived in Boston in the late 1700’s, where he made a living tanning the hides of the animals he had clearly just eaten entirely. He also wore a suit at his wedding that was made entirely in America, which was apparently notable at the time. History tries to tell us a few other things about Dawes’ life, but they don’t matter because the poor guy was friends with Paul Revere.

You remember Paul Revere. He’s the dude who rode on horseback warning the people of Massachusetts that the British were coming while simultaneously writing the first draft of the Declaration of Independence, fashioning a set of silver teeth for General George Washington, and being able to start fires with his mind. 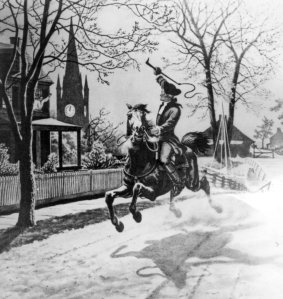 "Wake up! Quickly! Come see how awesome I am!"

Part of that crap is true. Revere, a silversmith in Boston, did have his famous ride, which ended with two lanterns being hung from a church to warn folks of British troops. But history screws the story up tremendously.

On April 18th, 1775, British troops set out from Boston towards Concord and Lexington in order to capture an arsenal and also two patriot leaders, Samuel Adams and John Hancock. Adams would later go on to be more associated with beer than anything else, and Hancock’s name is forever linked to signing things out of spite. 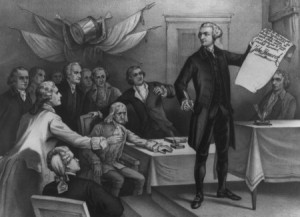 "HA! And you guys thought I wouldn't do it"

Both alerted hundreds of minutemen on the ride, and Revere arrived at their final destination, the Old North Church, shortly before Dawes. Then, fighting broke out in Lexington, the war started, and then everyone just went back to normal life in the 1770’s, where the leading causes of death were “starting your own nation” and “reaching the age of 40”.

When Revere died, his obituary didn’t even mention his ride. It simply talked about his good business mind, his plethora of friends, and his incredible pondering skills.

He was later reincarnated as Jack Black

So why all the love for Revere and not Dawes, who did just as much work? Fast forward nearly 100 years.

Renowned poet and renowned “only guy who ever became rich off of poetry” Henry Wadsworth Longfellow visited Boston one day in 1860 and decided to check out the Old North Church. He climbed to the top of the tower, asked somebody, “Hey, didn’t this have to do with something important in the birth of our country?” to which the guy replied, “I dunno, sure?” and Wadsworth decided that Revere needed to be honored.

Part of Wadsworth’s style was to manipulate historical events in order to turn people into bigger heroes than they actually were. Therefore, he decided that Revere needed to ride alone, row himself across the river, beat King George in a game of chess, and eventually launch into space at the end of the ride.

The impact this poem had on history was tremendous, as suddenly Dawes gets completely forgotten and Revere gets a statue in Boston.

The statue of LIES

But all is not lost for Whats-his-face Dawes. Historians, in a never ending quest to appear smarter than other people, have gone to great lengths to demythologize the poem and give honor to Dawes. Sure, Paul Revere is the household name, but the work of Dawes isn’t unnoticed anymore.

And things could always have been worse. There was actually a third rider that night: Samuel Prescott. He met up with Revere and Dawes on the road and starting riding with them, totally uninvited. Sure, he was the only rider to actually reach Concord, but he will always go down as the guy who crashed the party.

Dawes may have been forgotten for years, but at least he’s not Samuel Prescott: Great American Tagalong.

"Hey guys, so where are we going? Huh? Lexington and Concord? Yeah? That's cool. I'm glad we're all doing this together. This is fun. It's just the Revolutionary War best friends club over here"