“Hindsight is a beautiful thing.
When you can look back and see what patience and time can bring.”
– John Reuben

When I was finishing up high school/starting college, Xanga had reached the height of popularity. Naturally, it has gone the way of MySpace since then. Except worse. MySpace doesn’t get a spell check squiggly line underneath it. It’s recognized as an actual word. Xanga isn’t.

And while my old Xanga hasn’t been touched in many years, I can’t find the heart to delete it. That’s because it serves as a sort of inadvertent diary. Looking back on how I was in 2005 is just fascinating. I love seeing how I’ve grown/changed/gotten worse since then.

So that’s why every now and then, I take a trip back to see where I’ve come from. Here are the lessons I’ve learned from my old Xanga page:

I was much more hyper. I’m talking David Arquette in his prime hyper. I mean, I’m not saying I’m the most logical person alive these days. But there is a method to the madness. Back then, however? There’s no telling what could come out of my mouth. Posts are often difficult to read because of how often they jumped from topic to topic.

It’s not totally surprising, considering it’s the candid writings of an ADHD 17-year-old. But that doesn’t make it easier to deal with.

I seriously used Comic Sans for some reason. Figure that one out.

I couldn’t grow ANY facial hair. I supposed you could consider me a late-bloomer in the beard department. In the early days of college, I could only grow these mutton chop sideburns. So of course, I would do that. If you’ve got it, flaunt it.

Of course, this gave me ample opportunity to post great post-wisdom teeth photos, where you could clearly see the swelling: 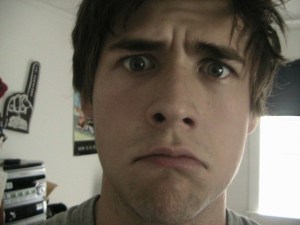 I was obviously concerned with what was happening to my face.

I loved my hometown. I seemed to talk about it all the time. I suppose that makes sense. I had just left a place where my friends were and where I felt at home. Naturally, I would still be proud of it. And my group of friends happened to be a generation that really did love the place.

But these days, it’s different. My hometown feels distant. It’s stranger to me than it used to me. Sometimes, I will actually get lost in it. It’s odd. I don’t associate with it as much as I used to. I guess that’s just a part of living and embracing somewhere else.

I already had a love of doing things that were only funny to myself. For example, there’s an entire series of photos of me wandering around my college campus dressed like this: 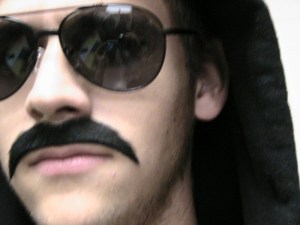 I had no problem talking about myself. Scour The GBOAT and tell me what you can find out about me. It’s not a whole lot. I’d rather you appreciate the writing than appreciate the person. But with the Xanga, it was all completely different.

Again, it’s likely because I was an ADHD 17-year-old who wanted attention. You could also point to the fact that the entire site was written for my friends, not a public audience. But either way, I had no problem at all talking about the details of what was happening in my life. Really personal stuff sometimes. Like, stuff that I actually feel weird about knowing about MYSELF. Imagine what my friends thought?

I still played guitar. I knew I wasn’t good, but at least I was trying and enjoying it. That’s gotta count for something, right?….right?

I had no problem mocking my friends. If I had a point I wanted to make, I would make it in a sarcastic way. I hadn’t really figured out how to pull off satire yet.

Okay, basically I was a huge jerk.

I was about 30 pounds thinner. MOVING ON.

But that’s half of it (at best). Years ago, I had this amazing thirst to make a change, to be different. Not for the sake of being different, but so that when I was finished somewhere, it was better off than I had left it. And this was evident in everything I wrote. It was my desire. My passion. For example, I wanted the culture of my school to be different by the time I was done with it.

I just didn’t know how to channel that. I had the desire but not the focus. Now I’ve got the focus, but the energy wanes.

Maybe it’s just a result of getting older, or maybe it’s a result of becoming cynical, but that isn’t there in nearly the same way. Sure, I’m not a hyperactive ADHD 17-year-old anymore, and that’s awesome. There was a lot of awful that I needed to grow out of. But that’s not the only reason things have changed.

I still have passions and desires. I still want to see and be a change where I am. But it’s more infrequent. There’s much more desire now to sit in my office, do my job well, and go home and watch sports. Play video games. Relax with friends.

As time goes by, things change. The wise Jon Foreman wrote about the subject in a song called Gone. It was one of my favorites in high school. He wrote about the impermanence of the things we often hold onto, like money and success.

One line in particular stood out to me as I listened to the song last night: “My high school dreams are gone.”

When you get older, these things happen. You don’t have the same loves you did when you were fresh out of high school. The same hobbies, even.

But more responsibilities and the pressures of life don’t have to take all of that away. Sure, my methods were unorthodox when I was still a hyper 17-year-old, but you can’t fault my heart.

I’m just saying that I miss that passion that seemed to ooze out of everything I did.

I miss my ADHD 17-year-old thirst.

What do you miss (if anything) about fresh-out-of-high-school you?