Over the course of time, facts about historical figures are often lost. Some of their greatest achievements are downgraded or even completely forgotten. People remember only one or two things that they accomplished, and the rest is thrown away.

The funny thing is, sometimes it doesn’t take a long amount of time for this to happen.

Just ten years ago, Drew Bledsoe was set to lead the New England Patriots to a potential Super Bowl run. He was injured in the second game (a sheared blood vessel in his chest, which sounds like the worst thing ever) and was replaced by unheralded backup Tom Brady. Brady, of course, has gone on to become on of the best quarterbacks in NFL history.

And has become Marsha Brady

Bledsoe was by no means a bad quarterback. In fact, he was one of the top QBs in the league. But now his contribution is all but forgotten.

Thankfully, the many adventures of Teddy Roosevelt are highly chronicled. Despite not having much detailed information regarding his time spent as a cowboy in South Dakota, Roosevelt did enough outside of that for the world to forgive him for disappearing.

The Greatest Blog Of All Time presents part 2 in a look at the life of Theodore Roosevelt, who IS cooler than you, Mike Posner.

Roosevelt spent a few years in the wilderness (okay, South Dakota. Not TOTAL wilderness), and they were very eventful years. He learned riding and roping, hunted outlaws, became a deputy sheriff, and befriended this guy:

The 1800s were the glory days of facial hair

But a horrible winter wiped out his cattle and his entire investment, so Teddy shrugged and went back east.

This joke was never really going to develop, to be honest

After getting remarried and being inducted to the British Royal Society (perfectly normal thing for a cowboy to do), Teddy jumped back into public life, campaigning for Benjamin Harrison, who then appointed him to the United States Civil Service Commission.

Roosevelt did such a crazy good job on the Commission, that even when President Harrison failed to win a second term in office, Grover Cleveland reappointed him.

Pop Quiz: when was the last time you did something so awesomely that even the people who you openly campaigned against wanted you around? Never? Of course not.

Cleveland was a Bourbon Democrat. The best kind of Democrat, if you know what I mean*

Soon, Roosevelt went back home to New York, where he served as the Police Commissioner. Imagine if Batman and Commissioner Gordon were the same person. That’s pretty much exactly how Roosevelt ran things. 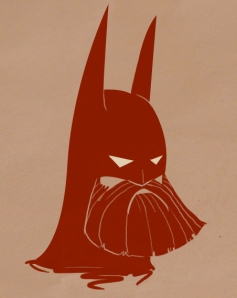 Commissioner Batman would've looked like this. I know you were wondering

But Roosevelt didn’t stop there. Remember the book he wrote? Hint: It was a really, really good book about naval warfare. You can buy it on Amazon.

Guys, everyone in the 1800s looked awesome

The actual Secretary of the Navy, John D. Long, was lazy and basically did nothing. For example, the battleship Maine blew up one day in a harbor of Havana, Cuba, and Long did nothing about it. This did NOT sit well with Teddy. Ten days after this fact, Long stepped out of the office to get a massage.

This led to the most EXTREME AFTERNOON EVER.

Teddy became Acting Secretary and wasted no time. In literally four hours, the told the entire Navy to get ready for war, ordered ammo, grabbed some experts to help figure out how to win the war, and even went to Congress to get permission to recruit as many sailors as he needed.

Do you realize how amazing it is to just wander into Congress and awesome your way into getting a decision from them?

Then, like a total badass, Roosevelt resigned, collected some volunteers, and went to fight in Cuba.

After the war, Teddy knew he only had one course of action, as he had single-handedly ended crime in New York City, both started AND ended a war, and been nominated for the highest military honor possible.

He was awarded the Medal Of Honor posthumously in 2001, after threatening to come back from the dead if they didn’t finally give it to him. 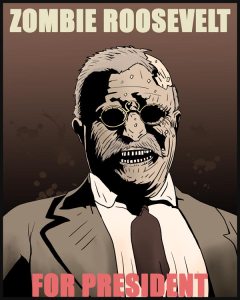 Would have won in a landslide

So, politics were the only option for the man who the public had come to know and love as “Teddy.”

P.S. Roosevelt hated being called Teddy. He called it “an outrageous impertinence,” thereby proving that his vocabulary was more awesome than yours.

*The joke here is that I’m an alcoholic

What is your least favorite nickname that people insist on calling you?