The Curious Case of Brian Wilson

In celebration of No Shave November, The Greatest Blog Of All Time presents a series on facial hair.

It is not about the leader of The Beach Boys, although his story certainly could be talked about in detail. At one point, he was considered to be on par with Lennon and McCartney as far as song writing goes. He wrote about surfing. But it’s cool, cause they wrote about holding hands.

It is not about a Barenaked Ladies song. Although, that could be worthy of a post as well. The subject of the post would be “Why did they try to cram so many words into each line of the song?”

It is not about sports, although it is about a sports figure.

No, this post is about a man you may not recognize. His name is Brian Wilson, 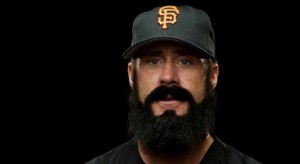 Brian Wilson is certainly a curious one. Sure, he is a talented major league pitcher. But nobody REALLY cares about that. Partially because he’s much more interesting as a person, but also because….well, it’s BASEBALL.

Wilson has become a bit of an icon in pop culture as of late because of his crazy antics. He appears on television with a horribly outdated cell phone. He goes to award shows in spandex tuxedos. He sometimes conducts interviews as a sailor.

But, for obvious reasons, Brian Wilson is most widely known for his facial hair, which has inspired fans of his team to adopt a “Fear the Beard” slogan.

It actually even feels too obvious to say "for obvious reasons"

What started as an agreement to grow beards all season as a sign of solidarity to the team has turned into an iconic image. Indeed, the beard just seems like a natural addition to someone with Brian’s personality (i.e. a lunatic) 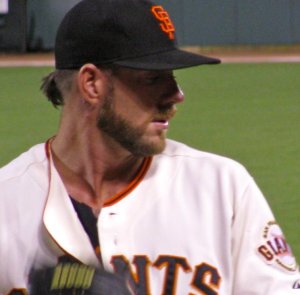 Take a minute to try and guess why

With his hair being brown, the jet black beard seems almost fake. And it almost is. Wilson dyes his beard black, to get that distinctive look.

Normally, one could just chalk this up to Brian Wilson being a lunatic. Nobody would argue with this. Do a Google search for “Brian Wilson and The Machine” if you want any more proof that he is, in fact, a looney.

But in the interest of beards and masculinity, it brings up a very interesting question: at what point does the masculinity of a beard get lost when used to grab attention?

Every year, men gather to compete in the World Beard and Mustache Championships. Men such as Gerhard Knapp: 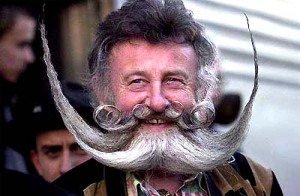 Now that I stop to think about it, it seems silly to say there are more men like Gerhard Knapp

Sure, the beards are amazing. But a lot of the amazement comes from the styling and manipulation. How far is too far, until the beard is no longer a beard, but just something that screams “HEY, LOOK AT ME, I’M HAIRY!”?

When a beard isn’t used for it’s natural purpose, it is no longer a sign of masculinity. It can’t be viewed that way. It is simply a form of entertainment.

Now, this isn’t necessarily a negative thing, of course. It is still very impressive to grow facial hair of this magnitude.

But at this point, it is for show. Nothing more.

Honestly, though, what might be the single most interesting thing about Brian Wilson is something doesn’t get the same attention as the beard.

It is his celebration after winning games.

This photo exists SOLELY to prove he has a face

Wilson, after every win, promptly turns away from players of the opposite team (so as not to act like he is rubbing the victory in) and does this gesture: an x, with his left hand balled up in a fist (in the glove), and his right hand with the index finger out.

For years, people speculated about what this meant. Most everyone agreed that he was mimicking the logo of the One More Round mixed martial arts clothing company.

Finally, one day, Wilson explained. Yes, he was doing that logo, as a tribute to the fighting spirit. But there was more to it.

It’s best to let Brian Wilson explain in his own words:

“And also it’s taking into consideration my own walks in life. For instance, when I cross my arms, I have my left hand in the fist and my right hand goes underneath pointing with my (index) finger. What I’ve taken into my own belief is that this finger represents one man. I’m that one person. And I can only go so far in life leaning on my own understandings and my own strength. The fist represents the power of the Holy Trinity: the Father, Son and Holy Ghost. The fist is symbolic of a circle. It’s never-ending. This strength will only continue to grow. So here’s the strength of God and the strength of man. And without him, I am nothing. I can only go so far in this life. But when I cross, I now have this one person with the strength of Christ, and I can do anything through Christ who strengthens me. I can get over any battles in life.

“So I basically give respect to the ultimate fighting world and I also give respect to Christ, the audience of one that I play for. I don’t play for anything else. I play to impress Him and only Him and I must honor Him through defeat and also successes because I wouldn’t be here today if it weren’t for the strength that He gives me. Talent only goes so far. But faith gets you a little farther. So that’s what it is. It just represents my faith and trust in him, and letting him know and the world know that any believer that walks with Christ, or any walk of life you have, no matter where you are, I’m showing respect to you for your hard work, too. Because it’s not easy living in this world.”

(Interviewer) I asked him why he decided to make the gesture at the end of a game.

“I just thought it would be a good time. It shows no disrespect toward anybody. It’s all positive praise. It’s not for showboating. It’s not to start an epidemic. It’s just me getting a quick message out to the world and to Christ and that’s it. I just thought, `What more perfect time to display my faith than at the end of a game?’”

(Interviewer) I knew that Wilson came to Christianity later in life. His father died of kidney cancer when he was 17, and for a long time, he was disillusioned.

“I had to go through my struggles in life. My alienation towards Christianity was very prominent through my adolescence. One day it hit me. I felt I needed to start correcting my life. This happened when I was 23 years old. I was in Augusta, Ga. (playing for the Giants’ low-A club), and I was just playing cards, going about my business, and every Sunday a group of guys would go with the team chaplain. I didn’t even know what `chaplain’ meant.

“Well, my father passed away when I was 17 and you know, I was praying he wouldn’t die. And he was taken away from me. I didn’t understand. It had nothing to do with your prayers not being answered. It was just his time to go. But me being 17 years old, not a very mature kid, I just took that as Him turning his back on me, so I turned my back on Him. When I put my cards down and went in the dugout to speak to the team chaplain, I soon learned that wasn’t the way it worked. No matter how many times I turn my back on God, He’ll always be in front of me. I could stray away from Him for 90 years but as long as I know Him for one day, He’ll honor me in heaven. So I thought that would be one heck of a life-altering change that I should make.”

Is Brian Wilson a pretty fascinating dude? Oh most definitely.

What do you think about manipulated facial hair? And Wilson’s celebration?

13 responses to “The Curious Case of Brian Wilson”