How To Be A Sports Fan: Support and Believe

This is another lesson in my HTBASF series. It is lesson 5 or 6, depending on where you list a lesson that is/will be posted on XtraBacon.com.

This entire post could probably be summed up just like that, but apparently I’m REQUIRING myself to wax philosophically for the next 1,000 words or so. I’m sorry in advance if this post isn’t quite as tongue-in-cheek as the previous HTBASF posts. I just feel like, with college football upon us now, this needs to be discussed. Here goes:

You want to be a sports fan? You want to ACTUALLY care for and support a particular team? Then be prepared to do just that. 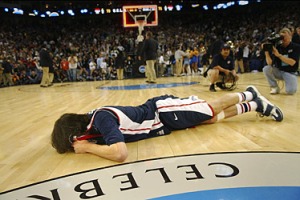 Even if it means dealing with moments like this

It sounds simple, but I promise you that it isn’t. I once wrote a guest post for Stanton Martin’s now defunct StantonMartin.com about why nobody should EVER become a sports fan. It’s because cheering for a team is a lot like having a kid that you care for greatly but who occasionally, despite their best efforts, lets you down tremendously. Not only that, but when your child DOES let you down, a whole bunch of people you don’t even know will tell you how much your child sucks and how stupid your child is. And we won’t even discuss how it’s a little weird that they are allowed to say that about a kid. Or why everyone with an awful opinion about sports is given an opportunity to publish it.

Side note: there are places on the internet you’re better off avoiding

Does that sound appealing? Does the harassment and disappointment sound appealing at all? Of course not. Why would it? It’s stupid to care that much about something that will ultimately and inevitably disappoint you. Yet it’s what I do as a sports fan. It’s the insanity that all of us, as fans, accept every single year. It’s a truth I have to remind myself of before every season of anything starts up. It doesn’t matter if your team is playing for a championship or is struggling to even have a winning season, you have to be prepared to face the worst.

But most importantly, you MUST support them. Always.

You are not allowed to speak badly or disassociate yourself from them when things go poorly.  You have chosen to be their fan, you must stand beside them. You must be willing to admit when they perform poorly but still choose to have their backs regardless. You know that friend you have who does dumb stuff sometimes? Or maybe they have bad taste in music or movies so sometimes you ridicule them to their face because it’s fun? You still have their back through thick and thin. They’re your friend. You get in a barfight for them and then AFTERWARDS you tell them why it was a bad idea.

Rivalries will get petty. Where I am, I see a lot of fans of Ole Miss and Mississippi State arguing with each other. They take turns calling the routines that the other school has stupid. MSU fans say that the Ole Miss “Landshark” hand gesture is the dumbest thing in the world (It totally is) and Ole Miss fans make fun of MSU for putting #HAILSTATE in their endzone (It was actually a genius marketing campaign that, combined with introducing special one-game uniforms brings more national attention to the team and makes recruits more interested in playing there).

Seriously though, you gotta admit it was a PRETTY clever idea from a marketing standpoint

The parenthetical statements are there for a reason. It’s going to be really easy to defend your own team and make fun of your rivals. I get it. But the point isn’t to be blind and biased in your support, but to not worry so much about the words of people who are obviously going to be biased against what you do.

That’s the same sort of thing you have to do for your team. Be real about their shortcomings, but not harsh. Have their back when it’s needed, but don’t be so focused on hating rivals that you overlook being a fan of your own. Be proud of the association you have with them, even when you feel they’ve let you down.

Even if they’re owned by Jerry Jones

Secondly, make sure you believe in them.

You don’t always have to predict a win, but at least believe they are capable of it. Believe. It’s more worth it to have their backs and support them and end up losing than to be shocked by success. Trust me. It won’t always seem that way, but it absolutely is the truth.

No great coach will ever look at any game on his schedule and say, “Well, we’re going ahead and ruling that one out.” Doesn’t matter who they’re playing against. That’s dumb. Instead, they do whatever they can to both physically AND mentally convince their players that they are capable. That’s what makes the difference between a good coach and a great coach. 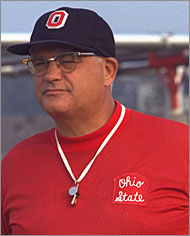 Don’t listen to your rivals. They’ll say that you’re going to lose every game. They’re saying that you shouldn’t even fake any hope in beating a particularly good team, even though (and this is important so pay attention) they start each season with the same hope you do. Don’t listen to them when they harass you when your team falls short. A few slight differences, and they would be in the same boat. And hopefully you would be gracious enough to remember that when they DO fall short, but let’s be honest, you probably won’t.

It won’t always be easy. But believe me, it will always be worth it. The lows will feel low, but the highs? They’re the highest. You’ll often be discouraged and wonder why you even care, but then you will remember that cold rainy night you stupidly sat through an entire game and saw one of the best comeback victories you had ever seen. You’ll watch the YouTube video of that wonderful and amazing moment you waited for when it all seemed hopeless.  You will sit through the rough seasons because the moments when you’re competing for the top spot feel that much more worth it.

Start each season believing your team can go undefeated. Stand by your team when they don’t. That’s what makes you not just a sports fan, but a GOOD fan. And if you look around, you’ll see that it’s the rarest form of fan around.

It won’t always be easy. But it will always, always, be worth it.

3 responses to “How To Be A Sports Fan: Support and Believe”