Whilst I am enjoying the Canadian summer (take about twenty American degrees from whatever the temperature is where you are), The GBOAT will feature Canadian themed posts. Maybe you’ll learn something but probably not.

Canadians don’t typically get pissed off.

It’s honestly quite difficult to anger a Canadian. Not to annoy, or irritate one, like a grain of sand to an oyster. No, to totally anger a Canadian takes a highly concentrated and dedicated effort.

Or, you could just say one bad thing about Tim Hortons.

It’s complicated, like a Neil Peart drumset. REFERENCE TO A FAMOUS CANADIAN WHO ISN’T ALAN THICKE!

Tim Hortons is as Canadian as the Queen, comparable to how Americans feel about apple pie and how Italians feel about their soccer team falling over and crying: it is a part of their identity. Even Canadians who don’t necessarily love Timmy Ho’s will defend the place fiercely, as it is the truest part of their Canadian heritage.

Truth be told, it’s a bit of an odd thing to feel so strongly about. It’s a fairly simple place, with nothing really standing out. Somehow, a cultural icon has been built around a nucleus of mediocre coffee and doughnut holes called Timbits. It’s like a Canadian Dunkin’ Doughnuts, but with an entire nation willing to die in its defense.

Exactly how Christians feel about Chick-Fil-A

Yet what makes Tim Hortons so beloved is the fact that it isn’t complicated, and isn’t necessarily elaborate. It doesn’t particularly stand out, which fits the Canadian mindset awfully well. Timmy Ho’s does a few things, does it decently, and is perfectly content with that.

Simply put, Timmy Ho’s, like Canada itself, doesn’t really bother anybody, and they’re all fine with that.

Also, they’re probably going to be better than you at hockey, so just go ahead and accept that fact right now

Why? Because that IS Canada. And that IS the Canadian people: from bottom to top, they are epitomized by being solid, hard working people.

Okay, so maybe you won’t see the CURRENT Prime Minister in there….

What would be the working class place in America? McDonald’s, right? And it would be the place that other countries would look at and associate with America. Yet, in America, nobody takes pride in McDonald’s. Why? Because it’s nothing special. It’s everywhere, and it’s not necessarily all that great. Because it’s McDonald’s, and chances are, you jumped to several conclusions about the place just by reading the name.

And that right there is the fundamental difference between America and Canada. The place that is everywhere in Canada but not necessarily all that great? That’s the place that Canadians LOVE. While both countries share similar backgrounds in terms of the settling of the New World, America forged an entirely different course than Canada did.

Especially since America was all like, “Screw you, Britain!” and all that stuff

America is still convinced that it stays true to its roots. After all, the US was built on a self-made man mentality. We admired those who worked hard and were gritty. It’s the reason Americans love football, not soccer. We’re pretty sure we’re still living the type of lives that made Bruce Springsteen write music.

Yet in reality, Americans aren’t like that at all. We’re a country that was built upon that, but then everything the self-made man earned was handed down to slightly spoiled children. Then those spoiled children handed stuff down to even more spoiled children and so on and so forth until we somehow became a country that worshiped the trust fund. Heck, Americans got so caught up in instant gratification and excess and we let the title of “Most Popular Rapper” go from guys who were raised on the streets straight to, you guessed it, a guy from Toronto who starred in the Canadian Dawson’s Creek.

Tim Hortons is so popular in Canada because it embodies the Canadian spirit. Canadians are proud of being a culture full of working class people: The type of people that Americans still think we  are, when our identity is really found in the fact that we willingly eat Baconators.

The thing about Canadian culture is that they know who they are. They won’t be a powerhouse on the world stage, and that’s fine. Give them hockey, Canadian beer, and the band Rush, and they’re fine with that. Because that’s all Canadians need. They can look at who they are and say, “It’s not much, but at least we’re not snooty like the British, or extravagant like the Americans.”

And then they’ll go grab some Timmy Ho’s. 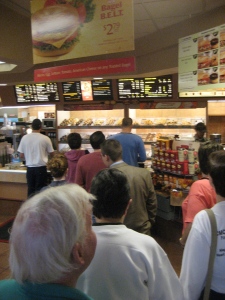 All of them. The entire population of the country. All at once.