The foyer is the single most important architectural concept ever created. Some would argue that such “great” achievements as the arch or the flying buttress had more historical significance, but some would be totally wrong in this instance. It is the foyer, such a simple concept, that proves to stand the test of time in terms of importance.

It is worth noting that in some areas of the world, particularly Eastern Canada, foyer is pronounced “foi-yea”, due to the disaster known as the over-Frenching of the area. This is normal for Canadians, whereas in America, only douchebags would ever say it as such. In America, it is simply, “Foy-yurrrr”. A simple pronunciation for a simple term, simple concept, and simpler way of life, which doesn’t strive to prove that it is better than anyone else, and also still thinks “Flying Buttress” is a silly name.

What makes a foy-yurrrr so special? Easy: it isn’t. All it really amounts to is a room before the main room. It’s a preamble, or perhaps a prelude to where the main event is. But why is this awesome? Because it plays possibly the most important role in the process: it prepares the visitor.

The foy-yurrrr is the handshake of rooms.

It’s cool, you can admit it. I already know that was the best analogy ever

Take, for example, the type of people who would pronounce it “foi-yea” but have no roots in Canada. Just by using that term, they have instantly assumed that they are better than you, and they will therefore shake your hand with just too much strength and excess. Their foy-yurrrr will exemplify that by being much more grandiose than it needs to be.

But it can easily go the opposite way, and be too cold. It’s easy to shake somebody’s hand with absolutely no desire to make physical contact with them. Of course, this heartless greeting will be noticed….by everyone around. Much in the same vein, it’s easy to have a room that is designed for greeting that screams the messsage, “NOBODY WANTS YOU HERE AND I KILLED YOUR DOG”

“Oh hey, welcome or whatever. Help yourself to a limp wrist handshake”

But the perfect foy-yurrrr is not found in the middle of these two extremes. It is not the balancing of excess and nothingness. What that creates is some sort of Yin and Yang effect that just makes it seem like you’re trying too hard to accomplish Zen. Here’s a hint: nobody actually really likes Zen balance.

But there is a type of handshake that is never wrong: the handshake-hug.

$0 to whoever knows where this is from

The handshake-hug is secretly a flawless greeting, though nobody realizes just how powerful it is. Sure, it can be screwed up if both parties aren’t aware of what is happening, but the rate of failure is much lower than with a complicated secret handshake that inevitably involves hopping on one foot and signing a blood pact.

One thing is always true about both a handshake-hug and a good foy-yurrrr: regardless of the relationship, it makes both parties feel appreciated and connected in the proper way. While a full-on frontal hug can send the wrong message, like a foy-yurrrr with an oversized commissioned family portrait, a handshake-hug is a clear sign of comraderie. Nobody has ever felt uncomfortable after a handshake-hug. 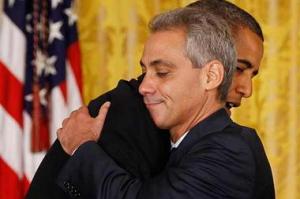 For both handshakes and foy-yurrrs, it’s easy to get it wrong. It’s just as easy to overthink it as it is to not think at all. But what seems to simple is actually incredibly crucial. And maybe that’s the point. Maybe it’s not so much the greeting or greeting room that is important. Maybe it’s just the fact that the little things are the things that ultimately matter the most. The handshakes. The greetings. Making other people feel like they matter as much as the people you share a home with. Making them feel appreciated. Perhaps those are the important details.

But who cares about all that. Just don’t ever say “foi-yea” if you can avoid it, guys.

Seriously, what are you doing to yourself?